"Committed to Memory: Bucks County artist remembered through the lens of longtime boyfriend" (The Wire) 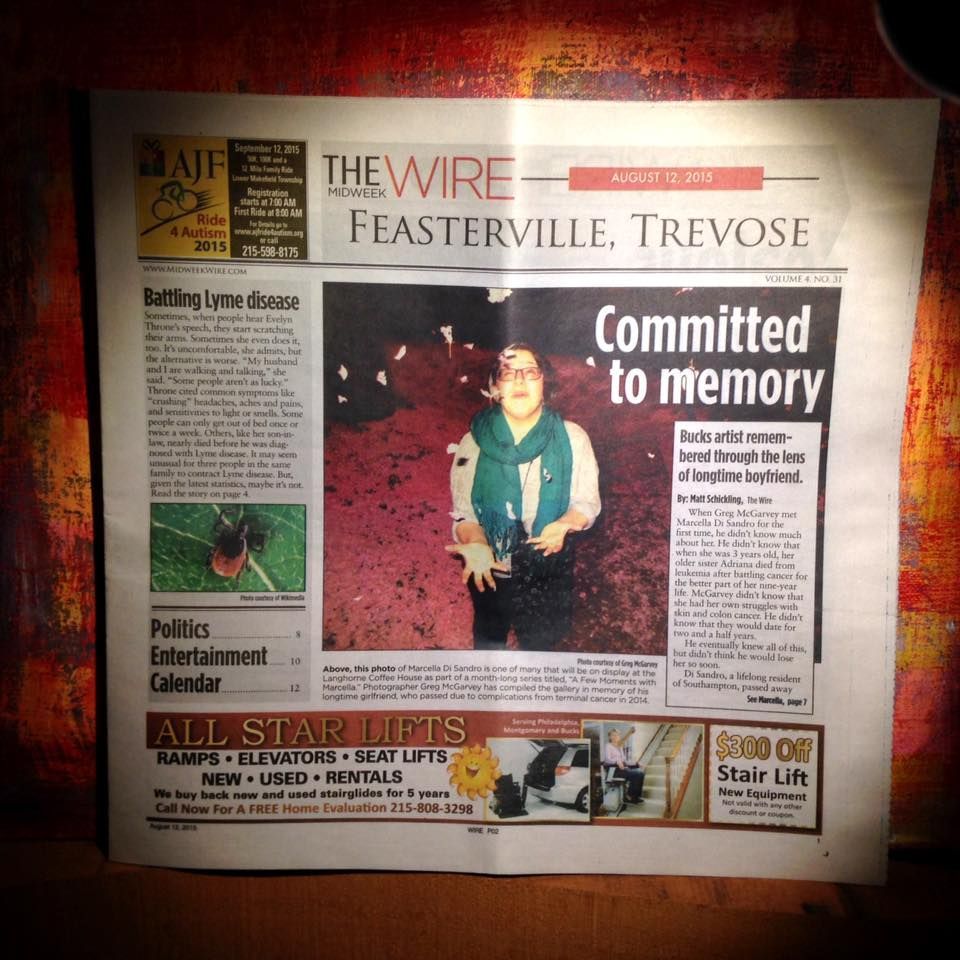 He eventually knew all of this, but didn’t think he would lose her so soon.

Di Sandro, a lifelong resident of Southampton, passed away due to complications from aggressive terminal cancer in September 2014 at the age of 28. The cancer was brought on by Fanconi anemia, a rare genetic blood disorder, the same her sister had.

About a year after her death, McGarvey decided that he wanted to remember Di Sandro for the way she lived, not what took her life. The Levittown photographer/musician began to compile a collection of photos he had of Di Sandro. He visited places they went together, channeled all the ways she inspired him and turned that inspiration into art. Those photos will hang on the walls of the Langhorne Coffee House as part of a month-long series titled, “A Few Moments with Marcella.”

“I knew at some point I wanted to tell her story, at least from my perspective,” McGarvey said in an interview at the Langhorne Coffee House. Later that night, he would begin to hang his work throughout the shop in preparation for the Aug. 7 opening. “It gets at the idea that it’s good to celebrate the moments of beauty in everyday life, the moments that are easy to miss otherwise.”

That idea matches the way Di Sandro lived, McGarvey said. Losing her sister so young, battling with cancer and being diagnosed with Fanconi anemia all contributed to Di Sandro’s worldview that the present holds more weight than the past or future.

“She was of the mind to appreciate the beauty of life because she knew it can be fleeting,” McGarvey said.

In one of the photos, Di Sandro is tossing fistfuls of cherry blossoms into the air, in another she’s posing with her hands on the colorful walls of Philadelphia’s Magic Gardens. Some of the photos show Toms-style shoes, Di Sandro’s usual footwear, in different places the couple had been together.

Other than the theme, there are several other elements of the show that relate to Di Sandro, like timing. It has been about a year since her passing and approaching what would have been her 29th birthday on Aug. 21. There’s also small connections, like how McGarvey and Di Sandro met in a coffee shop and on one of their first dates, she helped him prepare for his first photography show.

Art is often what they connected over. Di Sandro was a graphic designer by trade and was interested in all forms of creativity. For McGarvey, putting together his own show is a cathartic experience, but one he hopes will connect with Di Sandro’s friends and family.

Half of the proceeds from sales will benefit the Fanconi Anemia Research Fund, a cause for which nearly $46,000 has been raised in an online campaign started by Di Sandro’s family and friends.

“I didn’t want to force it. I just needed to do something to honor her memory,” McGarvey said. “She would believe in the message of this show.”

“A Few Moments with Marcella” will be on display at the Langhorne Coffee House, 102 S. Bellevue Ave., for the month of August. For information on Greg McGarvey, visit www.gregmcgarveymusic.com. To contribute to the Fanconi Anemia Research Fund, visit www.crowdrise.com/chellieschallenge.